EL PASO, Texas — Alfredo “Freddy” Valles was an accomplished trumpeter and a beloved music teacher for nearly four decades at one of the city’s poorest middle schools.

He was known for buying his students shoes and bow ties for their band concerts, his effortlessly positive demeanor and a suave personal style — “he looked like he stepped out of a different era, the 1950s,” said his niece Ruby Montana.

While Valles was singular in life, his death at age 60 in February was part of a devastating statistic: He was one of thousands of deaths in Texas border counties — where coronavirus mortality rates far outpaced state and national averages.

In the state’s border communities, including El Paso, not only did people die of covid-19 at significantly higher rates than elsewhere, but people under age 65 were also more likely to die, according to a KHN-El Paso Matters analysis of covid death data through January. More than 7,700 people died of covid in the border area during that period.

In Texas, covid death rates for border residents younger than 65 were nearly three times the national average for that age group and more than twice the state average. And those ages 18-49 were nearly four times more likely to die than those in the same age range across the U.S.

“This was like a perfect storm,” said Heide Castañeda, an anthropology professor at the University of South Florida who studies the health of border residents. She said a higher-than-normal prevalence of underlying health issues combined with high uninsurance rates and flagging access to care likely made the pandemic even more lethal for those living along the border than elsewhere.

That pattern was not as stark in neighboring New Mexico. Border counties there recorded covid death rates 41% lower than those in Texas, although the New Mexico areas were well above the national average as of January, the KHN-El Paso Matters analysis found. Texas border counties tallied 282 deaths per 100,000, compared with 166 per 100,000 in New Mexico.

That stark divide could be seen even when looking at neighboring El Paso County, Texas, and Doña Ana County, New Mexico. The death rate for residents under 65 was 70% higher in El Paso County.

Health experts said Texas’ refusal to expand Medicaid under the Affordable Care Act, a shortage of health care options and the state’s lax strategy toward the pandemic also contributed to a higher death rate at the border. Texas GOP leaders have opposed Medicaid expansion for a litany of economic and political reasons, though largely because they object to expanding the role or size of government.

“Having no Medicaid expansion and an area that is already underserved by primary care and preventive care set the stage for a serious situation,” Castañeda said. “A lot of this is caused by state politics.”

Texas was one of the first states to reopen following the nationwide coronavirus shutdown in March and April last year. Last June — even as cases were rising — Gov. Greg Abbott allowed all businesses, including restaurants, to operate at up to 50% capacity, with limited exceptions. And he refused to put any capacity restrictions on churches and other religious facilities or let local governments impose mask requirements.

In November, Texas Attorney General Ken Paxton filed an injunction to stop a lockdown order implemented by the El Paso county judge, the top administrative officer, at a time when El Paso hospitals were so overwhelmed with covid patients that 10 mobile morgues had to be set up at an area hospital to accommodate the dead.

Unlike Texas, New Mexico expanded Medicaid under the ACA and, as a result, has a much lower uninsured rate than Texas for people under age 65 — 12% compared with Texas’ 21%, according to Census figures. And New Mexico had aggressive rules for face masks and public gatherings. Still, that didn’t spare New Mexico from the crisis. Outbreaks in and around the Navajo reservation hit hard. Overall, its state death rate exceeded the state rate for Texas, but along the border New Mexico’s rates were lower in all age groups.

For some border families, the immense toll of the pandemic meant multiple deaths among loved ones. Ruby Montana lost not only her uncle to covid in recent months, but also her cousin Julieta “Julie” Apodaca, a former elementary school teacher and speech therapist.

Montana said Valles’ death surprised the family. He had been teaching remotely at Guillen Middle School in El Paso’s Segundo Barrio neighborhood, an area known as “the other Ellis Island” because of its adjacency to the border and its history as an enclave for Mexican immigrant families. 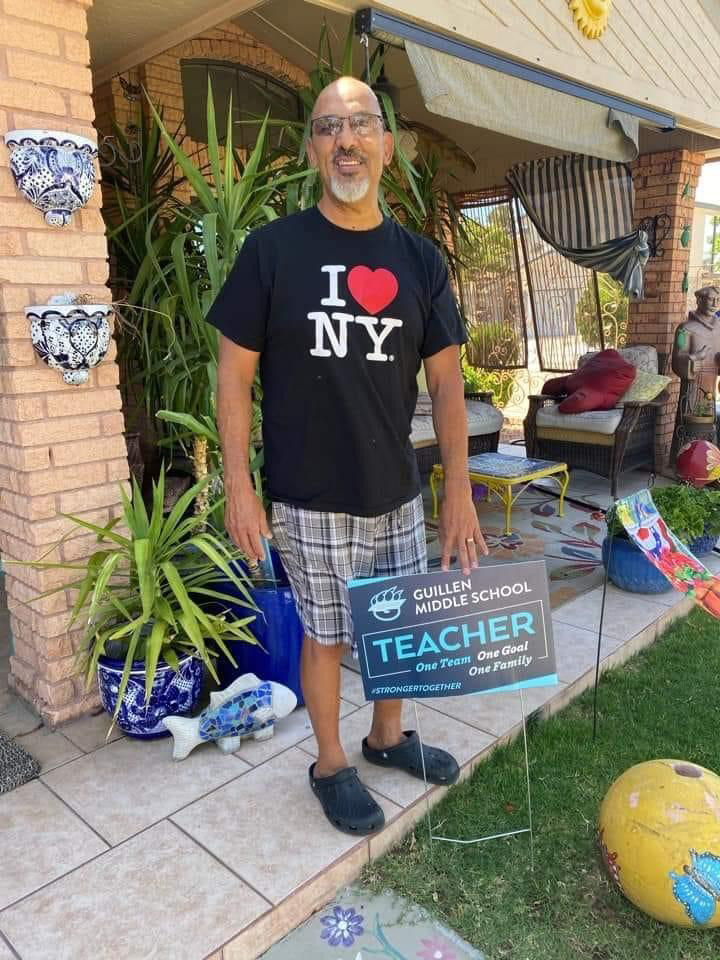 When Valles first got sick with covid in December, Montana and the family were not worried, not only because he had no preexisting health conditions, but also because they knew his lungs were strong from practicing his trumpet daily over the course of decades.

In early January, he went to an urgent care center after his condition deteriorated. He had pneumonia and was told to go straight to the emergency room.

“When I took him to the [hospital], I dropped him off and went to go park,” said his wife, Elvira. But when she returned, she was not allowed inside. “I never saw him again,” she said.

Valles, a father of three, had been teaching one of his three grandchildren, 5-year-old Aliq Valles, to play the trumpet.

They “were joined at the hip,” Montana said. “That part has been really hard to deal with too. [Aliq] should have a whole lifetime with his grandpa.”

Hispanic adults are more than twice as likely to die of covid as white adults, according to the Centers for Disease Control and Prevention. In Texas, Hispanic residents died of covid at a rate four times as high as that of non-Hispanic white people, according to a December analysis by The Dallas Morning News.

Ninety percent of residents under 65 in Texas border counties are Hispanic, compared with 37% in the rest of the state. Latinos have high rates of chronic conditions like diabetes and obesity, which increases their risks of covid complications, health experts say.

Because they were more likely to die of covid at earlier ages, Latinos are losing the most years of potential life among all racial and ethnic groups, said Coda Rayo-Garza, an advocate for policies to aid Hispanic populations and a professor of political science at the University of Texas-San Antonio.

Expanding Medicaid, she said, would have aided the border communities in their fight against covid, as they have some of the highest rates of residents without health coverage in the state.

“There has been a disinvestment in border areas long before that led to this outcome that you’re finding,” she said. “The legislature did not end up passing Medicaid expansion, which would have largely benefited border towns.”

“It’s exactly what we warned about,” Escobar said. “People in Texas died at disproportionate rates because of a dereliction on behalf of the governor. He chose not to govern … and the results are deadly.”

“Throughout the entire pandemic, the state of Texas has worked diligently with local officials to quickly provide the resources needed to combat covid and keep Texans safe,” she said.

Ernesto Castañeda, a sociology professor at American University in Washington, D.C., who is not related to Heide Castañeda, said structural racism is integrally linked to poor health outcomes in border communities. Generations of institutional discrimination — through policing, educational and job opportunities, and health care — worsens the severity of crisis events for people of color, he explained.

In some Texas counties along the border more than a third of workers are uninsured, according to an analysis by Georgetown University’s Center for Children and Families.

“The border is a very troubled area in terms of high uninsured rates, and we see all of those are folks put at increased risk by the pandemic,” said Joan Alker, director of the center.

In addition, because of a shortage of health workers along much of the border, the pandemic surge was all the deadlier, said Dr. Ogechika Alozie, an El Paso specialist in infectious diseases.

“When you layer on top not having enough medical personnel with a sicker-on-average population, this is really what you find happens, unfortunately,” he said.

The federal government has designated the entire Texas border region as both a health professional shortage area and a medically underserved area.

Jagdish Khubchandani, a professor of public health at New Mexico State University in Las Cruces, about 40 miles northwest of El Paso, said the two cities were like night and day in their response to the crisis.

Manny Sanchez, a commissioner in Doña Ana County, credits the lower death rates in New Mexico to state and local officials’ united message to residents about covid and the need to wear masks and maintain physical distance. “I would like to think we made a difference in saving lives,” Sanchez said.

But, because containing a virus requires community buy-in, even El Paso residents who understood the risks were susceptible to covid. Julie Apodaca, who had recently retired, had been especially careful, in part because her asthma and diabetes put her at increased risk. As the primary caregiver for her elderly mother, she was likely exposed to the virus through one of the nurse caretakers who came to her mother’s home and later tested positive, said her sister Ana Apodaca.

Julie Apodaca had registered for a covid vaccine in December as soon as it was available but had not been able to get an appointment for a shot by the time she fell ill.

Montana found out that Apodaca had been hospitalized the day after her uncle died. One month later, and after 16 days on a ventilator, she too died on March 13.

This story was done in partnership with El Paso Matters, a member-supported, nonpartisan media organization that focuses on in-depth and investigative reporting about El Paso, Texas, Ciudad Juárez across the border in Mexico, and neighboring communities.

To analyze covid deaths rates along the border with Mexico, KHN and El Paso Matters requested covid-related death counts by age group and county from Texas, New Mexico, California and Arizona. California and Arizona were unable to fulfill the requests. The Texas Department of State Health Services and the New Mexico Department of Health provided death counts as of Jan. 31, 2021.

Texas’ data included totals by age group for border counties as a group and for the state with no suppression of data. New Mexico provided data for individual counties, and small numbers were suppressed, totaling 1.6% of all deaths in the state. (Data on deaths is commonly suppressed when it involves very small numbers to protect individual identities.)

National death counts by age group were calculated using provisional death data from the Centers for Disease Control and Prevention, and included deaths as of Jan. 31, 2021.

Rates were calculated per 100,000 people using the 2019 American Community Survey.

KHN (Kaiser Health News) is a national newsroom that produces in-depth journalism about health issues. Together with Policy Analysis and Polling, KHN is one of the three major operating programs at KFF (Kaiser Family Foundation). KFF is an endowed nonprofit organization providing information on health issues to the nation.

This story can be republished for free (details).

One Year In: How Covid’s Toll Compares With Other Causes of Death
March 11, 2021

Wing Chun Master vs Bullies | Wing Chun in the Street

At Urgent Care, He Got 5 Stitches and a Big Surprise: A Plastic Surgeon’s Bill for $1,040

12,000 Square Miles Without Obstetrics? It’s a Possibility in West Texas

Restoring a Sense of Belonging: The Unsung Importance of Casual Relationships for Older Adults

There are no comments to display.